Absolute Write, Colossus, Egypt, Greece, Mausoleum at Helicarnassus, pharos of alexandria, Photography, Rhodes, Seven, Seven Wonders, Seven Wonders of the Ancient World, The Colossus of Rhodes, The Great Pyramid of Giza, The Hanging Gardens of Babylon, The Lighthouse of Alexandria, the Statue of Zeus at Olympia, the Temple of Artemis at Ephesus, Turkey

The number seven has a lot connected to it: Virtues, Sins, Samurai, Sages (in both Greece and China), Dwarves and Brides (with an equal number of brothers to accompany them). There were also seven Kings of Rome and equally seven emperors not to mention Shakespeare’s ages of man, Gaiman’s Endless, Tolkien’s Valar (and stones and stars and Dwarf kings, but only one White tree) and Martin’s Kingdoms of Westeros… At one point there were also seven Doctors in Doctor Who but recently they seem to have acquired some more from somewhere. We could also talk about Seven of Nine, Blakes Seven or the fact that 7 inches is the diameter of a 45rpm gramaphone record… 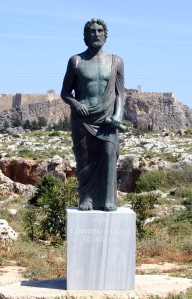 One of the Seven Sages of Greece – Cleobulus of Lindos, one time Tyrant of Lindos

Yeah, ok, I have missed a lot from that list because 7 is a very common number in a lot of things. However, I missed one thing that is obvious and probably should not require you to check the same wikipedia page I have been looking at to know about it. What I want to talk about are the seven wonders of the ancient world.

I’ve always been fascinated by these, ever since hearing about them at primary school. Things so grand and over the top that their reputations have lasted thousands of years. Of course, I am sure you all know the names of the seven ancient wonders, but just in case here is the list:

The Great Pyramid at Giza, the Hanging Gardens of Babylon, the Temple of Artemis at Ephesus, the Statue of Zeus at Olympia, the Mausoleum at Helicarnassus, the Colossus of Rhodes and the Lighthouse (or Pharos) of Alexandria.

It is interesting to note that two of them are graves (the pyramid and the mausoleum), two of them are examples of great feats of engineering for the time (the Hanging Gardens and the Lighthouse) and another two are of religious significance (the temple of Artemis and the Statue of Zeus). The odd one out is the Colossus of Rhodes which is a statue of a Titan which might therefore be considered ‘religious’ but is a bit of a weird one and could also probably count as a ‘feat of engineering’* You could therefore argue that the wonders were indicative of the interests of the cultures in those periods.

In my life, I have visited the sites of three of these monuments. I went to the outskirts of Cairo to visit the Pyramids on my Honeymoon and while I did not go into the Great Pyramid itself because of the massive queues, I did see it and went into one of the lesser ones. Quite a humbling and frightening experience – small, cramped tunnels, the ever present sensation of all those tonnes of rock above and around you. Even if you are not claustrophobic you begin to get a feel for what it is like to be claustrophobic. If you are claustrophobic, I suggest you think more than twice before going in. I also visited the island of Rhodes a few years back and saw the pillars on the mouth of the harbour of Rhodes Old Town which are supposed to indicate where the two legs of the Colossus were as they stradded the bay. I have also been to Turkey and wandered around the ruins of Ephesus, including the Temple of Artemis that was there.

One of the two monuments on Rhodes harbour indicating the possible positions of the feet of the colossus.

Of the four I have not visited, at least one is probably not accessible at this time, being in the middle of what was until recently a warzone, and may well have been a legend rather than something that actually existed**. Of the remaining three, I have seen some of the statues that were purported to come from the Mausoleum in the British Museum and there are fragments of the temple of Zeus in the Louvre, which I have also visited though apparently nothing remains of the statue which was the true Wonder***. Finally, the site of lighthouse, the island off Alexandria known as the Pharos, is still there though the lighthouse itself was finally destroyed by an earthquake in the 15th century. Maybe one day I will manage to visit the sites of these. You could argue that it is a shame that these great feats of architecture were allowed to fall into ruin. However, you could also say that it is a testement to the skills of those builders that even fragments of some of them still exist today never mind almost complete structures of one of them.

*Of course, they are all feats of engineering because of their sheer scale…. but the Pharos and Hanging Gardens are examples of someone applying a scientific principle – the use of light in navigation and the use of irrigation to turn a desert into a garden – to a practical use.

** If they didn’t, then the walls of Babylon almost certainly did and apparently also qualify for Wonder status

*** There are varying stories about the fate of the statue. Some claim Caligula ordered it beheaded and replaced with his own head, others that it was lost in a fire either at the temple itself (in 425AD) or in Constantinople in 475AD.

Yes, this is a blogchain post and that means consequences if you do not follow through and read all the other entries in the chain. This month’s comedy punishment is to be buried under 200 tonnes of masonry in a desert somewhere. So that is something for you all to look forward to enjoying…