‘Still a better love story than Twilight’ seems to be a common refrain on the internets at the moment. Twilight has been a book and film series that seems to have polarised geekdom, turning many against the idea of Vampire fiction while, at the same time, bringing a horde of teenage girls into it. 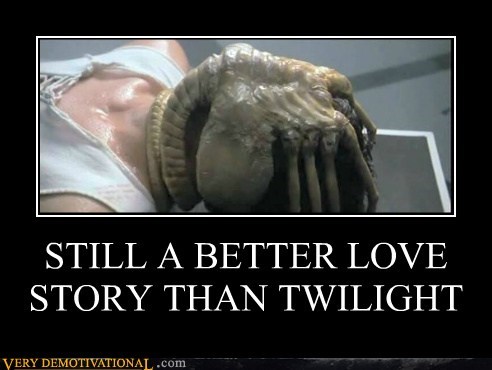 Many misunderstood Ridley Scott’s reimagining of Romeo and Juliet

Geeks are a weird bunch. We hate change. We like routine and things to be as they have always been. We recall the ‘good old days’ like dear old grannies recall the casual racism and horrors of the past – through spectacles so rose tinted we are practically blind. We remember how great things used to be without recalling some of the really awful things – shoddy special effects, awful dialogue, overacting. When something new comes along claiming to be ‘geek’ we hate it and the ‘johnny come lately’ fans that come with it. They aren’t real geeks, we complain. They weren’t there, man, in the trenches in the days when they cancelled Doctor Who, they call themselves Vampire fans and they don’t even know who Christopher Lee is. I mentioned Lestat to them and they looked blank. THEY HAVEN’T EVEN READ DRACULA!

Of course, in 20 years time those same teenage girls who are the target of all this ire, will be there themselves –  hating on some other new trend. Sneering at some young newcomers at a con and complaining into their brown ale that these new Vampires don’t sparkle and that this entirely detracts from the whole angsty drama of the inherent horror of the vampiric condition because it juxtaposes the darkness of their soul with the light on their skin thereby providing a visual contrast the reader can identify with. This is how it goes in the cycle of geek. By then, of course, I will be an old man laughing at both groups, knowing that I am still far more geek than either and safe in the knowledge that the previous generation of geeks is not in any position to contradict me.

Now, don’t get me wrong. I am not saying that Twilight is good. There are many flaws in it and these do not include the ludicrous ‘glowing in sunlight’ nonsense which seems to be one of the main foci for attack. The heroine is far too passive, for example, which gives the whole love story angle a stalkery feel and, as the in

ternet has reminded us repeatedly, undermines almost 40 years of feminism by convicing a new generation that all they need to be happy is to find an older man to look after them. This, above all others, is the main reason why the phrase ‘still a better love story than Twilight’ has been applied to a number of crazy pairings. The very fact that Fifty Shades of Grey started out life as a Twilight fan fic should tell you the inherent nature of the relationship here.

So, Twilight is certainly not flawless but I am not sure that the level of hate is quite to scale here. I think it is largely because it is such a big target – a massive fanbase who are intensely fantatical, the amplification of that fanbase through the films and a number of glaring flaws that even the dumbest geek can spot. At the moment it seems as if the entirety of geekdom is kicking into the franchise with big bovva boots because they have nothing else to do. And, yeah, I’ve done my share of that too. In geekdom the roles are reversed. It’s the big kid who gets attacked. And while I am not sure it deserves all the hate, it is equally undeserving of all the popularity.

However, it is worth considering what Twilight has actually achieved. Just as Interview with the Vampire and Buffy the Vampire Slay

er before it, it has yet again put the Vampire in the forefront of publishing. Like the creatures themselves, it seems the vampire phenomenon is a hard one to kill – just as interest wanes something comes along to ressurect it. It is, I feel, a fitting concept. Plus, as Harry Potter did for fantasy, there is also the fact that more children/teenagers/adults reading is a good thing. Even if they begin by reading Twilight, many move onto to other things and the Vampire renaissance has led to such things as the Morganville Vampire books, which are in my opinion superior in many many ways. If only because they feature an insane, Welsh, medieval alchemist character by the name of Myhrrin who really should be played by David Tennant when they make the movie.*  So, maybe we should let the Twilight franchise alone for a little bit. It’s over with, the last film has been released. There is sure to be another thing we can enjoy hating along very soon.

*Yes, I have in fact written the cast list for the Morganville Vampires series in my head. It’s what I do. It also, by the way, includes Olivia Williams and Anthony Stewart Head as Amelia and Oliver. Please do not judge me in my insanity…