After a very polite (and totally out of the blue) invite from the organisers I trotted ‘oop norf’ to Sheffield for a day at the Yorkshire Cosplay convention at the Magna conference centre. I was accompanied on this trip by Elizabeth Morgan, who you may remember from Vampire Month. Our stated goals were to promote and sell books. Our actual goals included such things as seeing lots of cool Cosplayers and maybe buy some comics.

Luckily, the organisers had guessed our secret agenda and therefore placed us facing the food area where a lot of the Cosplayers were hanging out and right next to a comic stall, the owner of which quickly picked up on Elizabeth’s fangirl thing for Gambit…

Regular readers will be aware of my dilemma about dressing for public appearances. For Steampunk it is usually a waistcoat and cravat, for more mundane events a t-shirt and jeans. As this was a Cosplay con, I thought I’d go the whole hog and regency-up in a full tailcoat ensemble and play a character from one of my favourite books – Mr Johnathon Strange from Susanna Clarke’s novel Johnathon Strange and Mr Norrell. I even completed the ensemble with an appropriately titled book of magic (from the list of titles found in the Library at Hurtfew and created by Anachronalia) to make sure everyone was aware of exactly who I was Cosplaying. Not that anyone asked. But then why would they be interested in an unassuming, polite Regency magician when Darth Vader was stalking around with a squad of Stormtroopers, Loki was doing interviews, the Terminator was hamming up a bad Austrian accent, Bumblebee was posing for photos with fans and a great big AT AT was stomping around… 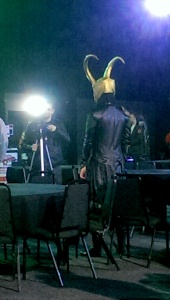 Loki does a piece to the camera for his TV show 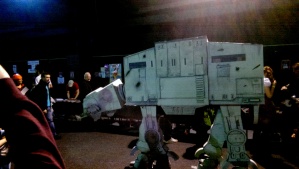 This was one of the most impressive costumes I saw. And yes, it is a costume not a model

One of Vader’s honour guard

Oh and Elizabeth got her dream and met her hero…

One advantage of my Cosplaying was I got to go into the dressing room and see the real Cosplayers getting ready. This was an experience. The amount of effort and detail that goes into what even the amateur Cosplayers do is phenomenal and these guys were Pros. A lot of elaborate costume, all home made, along with complicated electronics and props all gave the impression of the dressing room for an actual film set rather than a convention in Yorkshire.

The day included a number of interesting discussions with various people who visited the stall. Conversation veered from women in gaming (Gamergate reared its ugly head a little) to women in fiction and LRP. If nothing else I may have managed to steer one young lady who lives in Cornwall towards contacting my old friends in the Blood Red Roses LRP group. During quiet times we tried to keep a count of the number of different versions of the same characters. There were many Catwomen, several Harley Quinns, a couple of Black Widows but only one Black Cat (amazing how much variety a simple black catsuit can give a female Cosplayer). There is a probably a discussion to be had at some point about the lack of female role models leading to many having to dress as the same few characters but that can wait for a later day. Disappointingly we only saw a few versions of the Doctor (why does no one Cosplay William Hartnell? Has to surely be an option for the older Cosplayer) but did see an excellently well done gender switched 10th Doctor and of course there were a number of Daleks and a TARDIS. There was also an Amy Pond in ‘strippergram police uniform’ and a few Poison Ivy’s. In all some excellent costumes.

It was also International Hug A Wookie day. Maybe…

Elizabeth’s stock of badges with quotes from her books went

The 11th Doctor finds time for some comic shopping

quickly with the common refrain being ‘are you sure they are free?’ and a number of swagpacks and postcards were taken up. I claimed one of the more popular badge choices before they all went.

The planned panel discussion with some of the authors who were present unfortunately had to be cancelled due to lack of interest. Maybe next time we can draw a few more into the panel room…

In all it was a very entertaining if tiring day. Next event for me is the World Book Night at the Fab Café on 23rd April. After that I am in Salford for the Mancster con… more on those in a later post.

5 thoughts on “A day of Yorkshire cosplay”