If you are not by now already aware that today, the 23rd of November, is the 50th Anniversary of Doctor Who then I suspect you have not really been paying attention. It’s not even as if it is only talked about in geek circles or ‘on this internet thing that kids use these days’. It has in fact been all over the media – on the television and even in mainstream newspapers. Even Google got in on the act with one of their interactive games.

So yes, the 23rd of November, is the anniversary of the day that the first ever episode of Doctor Who, An Unearthly Child, was broadcast to a television audience that likely had no idea what to expect and which would, years later, officially become the world’s longest running science fiction TV show with 798 episodes as of the end of the last series in May 2013 (presumably the feature length anniversary special will make it 799 and the Christmas special with Matt Smith’s regeneration into Peter Capaldi number 800 which is rather neat numerically speaking). This is not only a major milestone anniversary (a Gold anniversary if it had been a marriage) but one which occurs while the show is still on the air, thereby allowing a special episode to be shown as part of the normal timeline of the series. Many previous milestones were not marked in this way because the show was off the air at the time. This includes the 40th (or Ruby anniversary) which occurred in 2003, two years before the 2005 reboot with Christopher Ecclestone as the Doctor, and the 30th (Pearl) which was in 1993, four years after the show was cancelled in 1989. There were no special episodes for those years.

In fact, to get to the nearest anniversary special before this one you really have to go right back to 1983 and ‘The Five Doctors’ which was aired to celebrate the 20th anniversary and that is a hell of a long time to wait between specials, especially ones that include more than one actor playing the role. Before that we have the tenth anniversary episode, The Three Doctors, which was broadcast as the first story of the 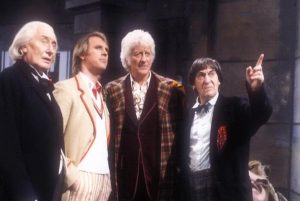 Obviously the expected pattern is an adventure featuring more than one Doctor. Though only one of them (The Three Doctors) actually managed to achieve all the Doctors present and all played by the original actors. By the time The Five Doctors was being filmed, William Hartnell had unfortunately died (and was replaced by Richard Hurdnall) and Tom Baker had refused to be involved in the project (he was replaced by unaired film footage and other trickery). The 50th anniversary special (The Day of the Doctor) is also not showing the complete set. But then it was never the intention for it to be ‘The 11 Doctors’ (or should it be 12 now that John Hurt is officially confirmed as ‘The War Doctor’, thanks to the recent webisode ‘Night of the Doctor’?*). I suspect that Steve Moffat decided to not even attempt to achieve what would be an almost impossible task to complete satisfactorily – replacing the three deceased actors with convincing copies alone would be difficult enough, not to mention producing convincing enough make up jobs on some of the surviving actors to put them plausibly back in approximately the right age range they were when they first played the role. The closest we are ever going to get to the ’12 Doctors’ on TV is, I am afraid, that which was quite ably achieved in ‘The Name of the Doctor’ with the quite clever use of old footage and glimpses of familiar costumes to give the impression of the old favourites coming back to haunt the current incumbent.

Still, despite this, The Day of the Doctor promises to be interesting, with a fascinating combo of Matt Smith and David Tennant and an appearance by Billy Piper as Rose Tyler.** And while TV is now never going to see much more than that in the way of multi-Doctor stories there is still scope for these to occur in other media. For example, soon after the 1996 TV movie starring Paul McGann, Terrence Dicks wrote the novel ‘The Eight Doctors’ which included appearances by all then existing versions of the Doctor. There was also the IDW comic series, The Forgotten, written by Tony Lee, which included short stories featuring all the incarnations up until David Tennant and a quite epic finale in which all ten appear in the same scene. Finally there is also scope for it in audio dramas with Big Finish using many of the previous actors to do voice work on a range of new stories. 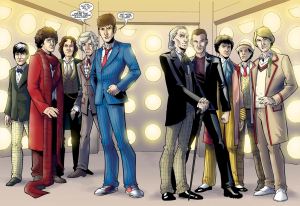 The iconic scene from Tony Lee’s The Forgotten

So, while I guess my long held dream of there being something equivalent to ‘The Five Doctors’ (one episode I have fond memories of) being produced on television is never going to happen, there is still a lot of good stuff out there. I for one am looking forward to this, the first anniversary special in thirty years…

* An excellent mini episode which allowed Paul McGann’s eighth Doctor the swansong he truly deserved and made me wish we had seen more of the adventures which had led to him being in that situation on TV instead of on audio and in books.

** And I am not going to talk about the speculation about who would be involved or why certain actors were not invited to take part, that is a whole mess of pain and suffering and troll bait right there…