I think I know what happened… 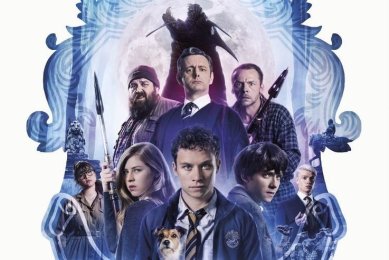 At some point in the last decade there was a party. Present at this party were the films St Trinians, Attack the Block, Harry Potter and Shaun of the Dead. I think Doctor Who popped by for a few hours too. No one remembers what happened at that party but 9 months later one of the attendees gave birth to a baby we shall call Slaughterhouse Rulez. I think Tom Sharpe was the Midwife.

The film seems to blend the above influences into a chaotic story about a young man (Don Wallace, ably played by Finn Cole) getting a place at a private school and trying to fit in with the upper class crowd that goes there. So far so classic fish out of water trope. As he explores the rather strange society of which he is now a part, he encounters the usual ‘school house tropes’ so beloved of Harry Potter and comes across the ever present culture of bullying and prejudice you always see in private schools. At the same time there is evidence of weird things – the history of the school talking about the slaying of a beast, the fracking company using school land to find shale gas and (weirdly) the same dog appearing in every portrait of every head the school has ever had.

Of course it really should not be spoilers to say that something goes wrong with the fracking and it leads to inevitable chaos. At least not to anyone who has ever watched Doctor Who. There is a very definite ‘Fracking is Bad’ analogy going on here which I doubt many will miss. This is inherent in the behaviour of the Fracking company and, of course, in the main horror plot. Though I won’t say what emerges from the deeps, I will say that it is definitely not Silurians. Once it happens, however, we move from ‘public school tropes’ straight into ‘horror movie tropes’.

OK, so I mentioned the influences above. This film does not manage to get the same over the top chaos of the bad behaviour of the St Trinian’s girls, opting instead for a slightly more down to earth portrayal. It also lacks a central hero with the same brooding on screen presence as John Boyega’s Moses in Attack the Block. The comedy and wit and direction are all excellently done but again do not quite live up to the genius of Edgar Wright. However, to be honest, all of that is like saying Vermeer’s Girl with the Pearl Earing is not quite as good as Da Vinci’s Mona Lisa. This is a well put together film with many excellent moments but one which will invite inevitable and largely unfavourable comparison to other films.

There were some missed opportunities. For example, the aforementioned dog was a brilliant addition and the amusing image of a very very similar dog in every portrait seemed to be hinting at something weird about either the head or simply just the dog (is the dog immortal? Is the head immortal and always have the same type of dog? Why are those portraits like that?). However, nothing seems to come of that. In addition, the house the hero ends up in (Sparta house) is portrayed as a house of ‘misfits and failures’ compared to the ‘house of geniuses’, the ‘house of jocks’ and the ‘house of women’*. However, for some reason, the so called house of misfits happens to have in their lobby the very spear used by the founder to slay the beast discussed in legend and has other features suggesting they were once more important. Nothing is made of this other than a throwaway mention used a comic relief. I feel there could have been a lot more plot relevance to all of that.

Overall, it was an enjoyable romp of a film with plenty of laughs and shocks and good use of famous names to play subsidiary characters supporting the mainly unknown young cast (of which I suspect only Asa Butterfield you might know from Ender’s Game). The supporting cast seem to be having immense fun hamming it up as caricatures. Pegg and Frost in particular are really going to town on their portrayals of a Housemaster and the leader of a group of environmental protesters.

Well worth a look. Though it does not quite achieve the greatness of any of its influences, it is an entertaining film.

*Which is totally not how houses in schools work (in public, independent or state schools) but Harry Potter seems to have made everyone believe that is how they work. You don’t get into a house because you are good at sports or good at something else. Though, I can understand how they managed to get a ‘house of women’ because, as is pointed out several times, they only started taking female students in the last year. That sounds exactly like the sort of thing a public school would do when faced with female students for the first time ever.