Sunday turned out to be the first (and only) full day I spent at the convention. I guess this is the disadvantage of living locally. While you get to save on hotel costs and travel costs, you miss out on some of the stuff that happens late into the night and early into the morning. Plus there is a tendency (for me anyway) to have to leave early to catch the last bus home and wander in lazily late the next day. Since it is unlikely Manchester will host for at least a couple of years, I suppose any future EasterCons I go to will be more full time.

As it happens, I made an effort on Sunday to get there early for a good reason which turned into an even better reason. I had promised R.A Smith that I would be present at the panel he was in with my camera so that I could take photos of him looking all knowledgeable and erudite. Since this panel was happening at 10am, and was therefore a so called ‘hangover panel’ this meant I needed to be in the building by not long after 9 in order (so I thought) to get a seat in what I suspected would be a packed room.

I was wrong on so many of the above assumptions… 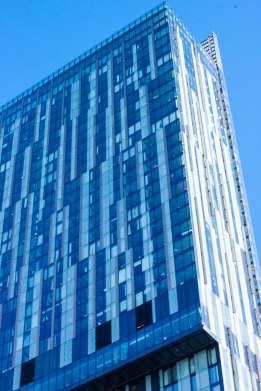 This is where were staying… can you not see its similarity to a giant USB drive?

When I wandered up to the Green room to see if I could track down Russ before the start of the panel, I was collared by  Starburst Columnist Ed Fortune, another of the panellists, and asked if I was doing anything just then. I said I was not and was therefore pressganged into service as a substitute panellist. Turns out Tony Ballantyne could not make it so I was a convenient Manchester based writer to contribute to the Manchester in Spec Fiction panel.

So, my assumption that I would not get a seat was unfounded as I had a reserved seat… right at the front. However, it also turns out that I didn’t need to worry even if I had not been in the panel as the venue was one of the larger rooms in the hotel rather than one of the smaller rooms such as used for the True Love and Trophies panel. There was still a large audience but the room was easily able to accommodate it with a few seats spare. I also did not manage to take any photos as I was somewhat busy being on the panel… Oh, and the audience were somewhat more awake than a ‘hangover’ panel might attract. They seemed to be a rather lively and interested group all told.

The John Rylands library: for all your Cthuloid needs.

So… thrown into the deep end… and replacing a popular and well respected panellist in a HUGE auditorium with microphones instead of the more intimate setting of previous panels. The pressure was on. Luckily, I was able to call on a lot of knowledge I have about the city of Manchester. Myself, R.A Smith (the moderator), Anne Charnock and Ed Fortune discussed various things that made this city unusual and suitable as a setting for Spec fic. Anne was there with a lot of history references (first programmable computer, various other scientific advances including the recent graphene advances), I came in with the politics (Manchester has to take the blame for communism and even in the last election, when the map went decidedly blue, Manchester was one of the few areas still very red), Russ talked about the Madchester music scene and Ed rolled in some classics like Jeff Noon and Alan Garner while riffing off some Doctor Who audio set in the city and centring on the Peterloo massacre (with the comment made that he worked in an office on the corner of two of the streets mentioned in that audio and how that scared him). In all an excellent discussion and was supplemented by the comments from the audience about how strange some of the architecture in Manchester is… including the building we were in which does (as Russ pointed out) look like a giant USB stick. Speculations about what it might be downloading may be left in the comments below… Then there is the perfectly apt venue for an occult conspiracy novel that is the John Rylands library.

By the way, if the organisers of next years Eastercon in Birmingham are reading this, I would like to point out that I also lived in Birmingham for a long while and know an equal amount of weird stuff about that city should they wish a panellist for a similar topic… 🙂

Apparently it is Starburst tradition to take a selfie with the Stormtrooper… who am I to go against such tradition?

Once that panel was over, Ed invited me over to the Starburst offices to do a spot on the Bookworm – FAB radio’s regular Sunday book related show. We spent an hour talking book news (JK Rowling’s publication of her rejection letters being a major item of interest) and discussing the convention. As all three on the show (me, Ed and Ann the producer) were Eastercon newbies this mainly revolved around the atmosphere of the event as well as a discussion about some of the panels we had each attended. My first time on radio… The Podcast version will be published soon and I will post a link to that once it is up.

The Public Engagement in Science Panel

I got back to the venue and had a spot of lunch before wandering into the Public Engagement in science panel. Here a number of the conference delegates who were also scientists were discussing the issues of getting the public interested in all things science related. This, like the biology one on Friday, was an issue close to my heart and something I see both writers and teachers being involved in. The discussion was initially focussed on semantics – the differences between Understanding and Engagement, for example – and there were some good thoughts on how it should be about the public doing science – using the innate curiosity that humanity possesses to explore the universe – rather than just reading about it. Not sure they managed to solve the problem, at least not by supplying any practical solutions, but there were ideas aplenty. 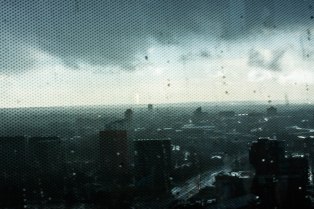 A storm hits Manchester, as seen from the 22nd floor

My final official engagement of the day was a visit to the Strange Horizons Tea party which was taking place in the Presidential Suite, 22 floors in the sky. There I hobnobbed with the editors of Strange Horizons and chatted with Ruth F Long again, mainly discussing Irish history and some strange anomalies in the Irish census data. A fun hour of chat and drinks and a chance to see the city from the great heights of the 22nd Floor. While a major storm was blowing in…

Then I ended the evening with a bit of relaxation in the form of a game of D&D refereed by Adrian Tchaikovsky. In this I joined R.A Smith, Ed Fortune, LM Myles, Peadar Ó Guilínn and Annie Czajkowski as a disparate group of monsters (I was a hobgoblin sergeant major) forced together out of mutual desire to escape a curse. It turned out exactly as you would expect a game run and played by a bunch of creative lunatics to go. Luckily the day was saved (thanks to cunning subterfuge, careful following of the letter of the rules, beheading a forger and the catchphrase ‘Greetings fellow humans!’) in time for me to head home…

In our final instalment shudder as the unexpected happens and Sunday is inexplicably followed by… MONDAY!