So. Let’s talk about vampires.

No, wait. Let’s talk about tortured billionaires who practise faux-BDSM instead of getting the therapy they clearly need and can certainly afford. The poor things. They’re all the rage right now. A year or two ago, you couldn’t turn around in the romance section of the bookstore without falling over a juicy, smoldering vampire hero. Now, it’s billionaires. Not a dripping fang or coffin in sight. They don’t even shapeshift. Say what?

1. He lives in a dark, secret world, and draws the heroine into it

For Vampire Dude, it’s the world of the supernatural, a place where the rules of human society don’t apply. He’s king of a vampire coven. One of a Secret Brotherhood of Hot Dudes Who Save The World. Or, he’s Ronnie Kray with fangs, a vampire mobster in the middle of a war against the local werewolf crochet club, or whoever. He’s probably also filthy rich. Seeing as he’s probably hundreds of years old, he has no excuse for being penniless. 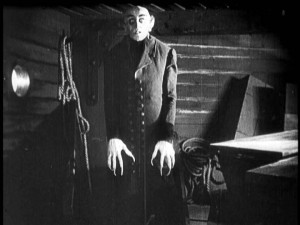 This is what Vampire Romance Heroes don’t look like

2. He threatens – and awakens – the heroine sexually

A no-brainer for Vampire Dude. Oops, sorry, did I eat you before you got off? How impolite.  ‘Hot sex with a ravenous monster is the best evah’ is one of the awesomest tropes in romance. We can’t get enough of this. Because if there’s no threat, then where’s the conflict? Nowhere, that’s where. Perhaps we sanitise the ‘monster’ aspect a little. Most vampire heroes are unrealistically gorgeous. They never look like the guy from Nosferatu. (http://en.wikipedia.org/wiki/Nosferatu) And no heroine ever seems to bleed to death from vampire sex, or catch some horrible disease. A little pain is acceptable, but generally the biting is multi-orgasmic. Hell, it sounds good to me. Where can I get one?

Same with Billionaire Dude’s heroine. She’s afraid of submitting to Billionaire because OMG, poor little me, he’s just so powerful and masterful and gorgeous and filthy rich, I can’t possibly… but is he the ‘best evah’? You bet. If he was a lousy lay, there’d be no story. At least, not a story that ladies all over the world would want to read.

3. The heroine is his weakness

Vampire Dude had everything squared away before the heroine came along. There he was, merrily slaughtering his enemies and chowing down on his choice of tasty human flesh with little remorse and less emotional attachment… and then blam! This lady comes along, and he’s Consumed with Forbidden Desire. So completely, in fact, that he starts making stupid decisions, like protecting her instead of getting on with the relentless business of being a Ice-Hearted Bloodsucking Overlord of Doom. Love sucks.

Billionaire Dude is the same. There he was, spending his vast fortune and happily screwing around to avoid his issues, and now the heroine comes along and he Has To Have Her. She’s the one who penetrates (snigger… she said ‘penetrates’…) his carefully constructed Façade of Arrogant Arsehole-ishness, and lets all the torment pour out.

You can draw these parallels with other types of romance hero, too. Dangerous, sexually threatening heroes are popular in historicals. Rakes, pirates, spies, highwaymen, the odd Viking invader. In futuristic romance, we have pirates and rebels and rogue starship captains, but also the alien hero – he gets additional Threatening Points because he’s probably got two cocks, or a stinger under his tongue, or his planet enslaves human women and forces them to bear half-alien monster babies, or something.

So, y’know. It’s easy to poke fun at the billionaire/intern genre. Especially since it’s had such big bestsellers lately, and everyone knows bestsellers are ripe for wise-ass snarkery and derision. But the Dangerous, Otherworldly, Obsessed Hero has been around for a lot longer than Christian Grey.

I say, bring back the vampire hero – if, indeed, he ever went away. He’s cool, he’s tough, he’s a fierce monster we can tame to our whims. And hey, he’s rich enough for me. I’m not greedy. Who needs billions, when you can have eternal life?

Erica Hayes was a law student, an air force officer, an editorial assistant and a musician, before finally landing her dream job: fantasy and romance writer.
She writes dark paranormal and urban fantasy romance, and her books feature tough, smart heroines and colourful heroes with dark secrets.
She hails from Australia, where she drifts from city to city, leaving a trail of chaos behind her. Currently, she’s terrorizing the wilds of Northumberland.