It was Halloween over the school half term break and so the Royal Armouries in Leeds were putting on some themed events. This allowed them to get out all their exhibits that were related to witchcraft or other supernatural occurrences and show them off to appreciative audiences.

One such event was a lecture by their curator of firearms, Jonathan Ferguson, entitled How to Kill a Vampire, which took place on the evening of the 30th October in the museum’s own lecture hall, the Bury Theatre.

This two hour lecture was split vaguely into two parts. In the first he talked about the traditional methods used, both in real life and fiction, to kill the undead. This was full of fascinating facts, even if the lecturer was somewhat hesitant in his delivery, and outlined the differences between mythological and fictional creatures such as zombies (reanimated corpses), Revenants (a lesser used term in the modern days for a visible ghost or animated corpse) and Vampires (which are typified by their tendency to drain lifeforce or blood). Some of it was common knowledge – stakes, garlic, sunlight – but through reference to folklore sources and archaeological evidence he quite ably linked the methods used to slay vampire in fiction (referencing everything from Varney the Vampire to Buffy and Blade) to what has been used in (mostly) eastern European villages for centuries to put an end to supposed curses – disease, ill fortune – that are attributed to vampires. 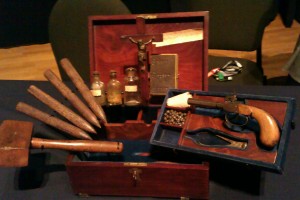 The practise of effectively scapegoating a recently deceased person is a common one in several cultures and generally arises because of anomalies in the decay process of a corpse. Maybe they do not decay fast enough because of sterile soil, for example, and this singles the corpse out as a vampire. According to Ferguson, in cases like this where villages attributed their woes to such a corpse, they generally went through several steps to ‘kill’ the vampire, trying all of the methods they could think of and only stopping if the bad things stopped happening. These methods involved a host of improvised weapons – mainly farm implements like sickles and even the traditional ‘stake’ so popular in vampire fiction is based on nothing more than a convenient fence post – and usually ended with the complete destruction of the body using fire (after which, as Ferguson states, there is usually nothing left anyway). There were some lesser known methods discussed too. For example, piercing the body with nails, which may be linked to the stake as well. One possible theory as to why this method was used might be linked to the ways corpses bloat due to trapped gases post mortem – another anomaly in the decay process that might be observed as supernatural in the uneducated. Piercing the flesh with a nail (or a stake) allows the gases to escape – restoring the corpse to normal. The ‘Vampire’ is slain. It was interesting to see the comparison between these rather morbid methods of solving a misunderstood problem by dismembering a helpless corpse and the more active methods employed in fiction, especially the evolution (and plausibility) of such esoteric devices as wooden bullets (or graphite ones as used in Ultraviolet), silver bullets and ultraviolet bombs and bullets. The ludicrous idea of using a small stake and thrusting it into the heart accurately while in combat with a Vampire (as seen multiple times in fiction but especially in Buffy) was also touched upon with reference back to Bram Stoker’d Dracula and Varney the Vampire where the protagonists use mallets to hammer the stakes through the breastbone.

Vampire Killing kit that the museum had acquired. Here Ferguson was clearly more in his comfort zone as his delivery was more confident and natural. A typical vampire killing kit usually comprises a number of items which are purported to be useful in dealing with vampiric threats – stakes, bottles of holy water and garlic essence, bibles or books of common prayer, crucifixes and guns loaded with silver bullets*. The controversy around these items is whether they were genuine 19th or early 20th century artefacts, created either as curios for tourists visiting eastern Europe or because someone really did think they needed protection from Vampires, or more modern fakes. Ferguson discussed in detail the evidence for and against these arguments, citing references from auction houses, folklore and even internet forums to build a convincing case that the balance of probability places the majority of these items firmly in the category of fakes. Such points as the inclusion of guns with silver bullets suggests that the earliest these items could have been made was after 1928 (rather than the late Victorian period as usually claimed) and certain facts about the methods of manufacture and the materials used are also damning. Most convincing of all, of course, is the confession of one poster on an internet forum who admitted to having produced a number of these items in the 1970s.

This does not, of course, stop Vampire Killing kits being sold on ebay and in real world auction houses for thousands of dollars (indeed, Ferguson described how he acquired the museum’s kit from a local auction house after a house clearance in Yorkshire). Nor does it demean the value of them as museum pieces – even if they were made as recently as the 1970s (and there is some evidence that the one Leeds have may have been made earlier, possibly even the 1920s) they are still antiques** and a well done fake with an intriguing story about why it was made in the first place is something just as worthy of museum space as a genuine article. In this respect they are much the same as the fake suits of armour displayed in the Tower of London. These were put there by the Victorians to demonstrate ‘armour through the ages’ but later historic research shows they do not represent the armours used in those periods. However, the Tower keeps them in place as examples of historic misconceptions. Ferguson mentioned that when this kit is on display he labels it clearly to show the belief about its authenticity, allowing the visitor an insight into how such fakes can arise and why.

At the end of the lecture, the audience were allowed to ask questions and to go up on stage to view the kit. It was quite fascinating to see it close up and it was even possible to handle the items inside it under guidance from a member of the museum staff.

In all this was a very interesting way to spend an evening on the night before Halloween.

* Yes, this is normally believed to be for Werewolves but the boundary between Vampire and Werewolf is often blurred in myth, especially with a concept of shape-shifting vampires and some cases like the Greek Vrykolakas which are wolf like vampires. According to Ferguson the first movie reference to the use of silver bullets for Vampires was in 1928, though silver as protecting against and harming evil is a common theme in folklore.