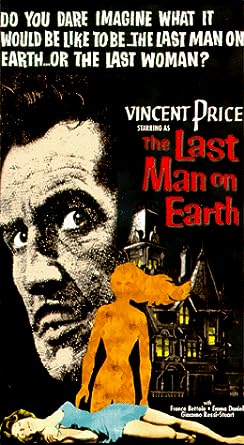 First, a little history…  These days, the backdrop of a zombie apocalypse can hardly be considered jaw droppingly original. With such beloved properties such as THE WALKING DEAD (2010), NIGHT OF THE LIVING DEAD (1968) and about a million in between, the zombie hoard concept has staggered and moaned its way into our hearts. Funny thing is, boil ‘em down to their component parts and you’ll find there are essentially two types of zombie films: Pre-Apocalypse and Post. But in the early 1950s, the idea of a world where mankind had been put on the endangered species list was unheard of. Lucky for us that in 1954, genre master Richard Matheson penned a novel that changed all of that.
In the world of Science Fiction and Horror, “I Am Legend” is kind of an important book. It inspired not only what is considered by many to be the quintessential zombie film (Romero’s NIGHT OF THE LIVING DEAD, 1968), but also three direct adaptations (including THE OMEGA MAN, 1971 & I AM LEGEND, 2007) and essentially an entire subgenre of horror. In other words, if the Zombie Apocalypse compels you to write a thank you note, it should probably be addressed to Richard Matheson.
But enough of that…
Tonight’s film is not only the first to adapt the story “I Am Legend”, it also happens to be the most faithful to the source material.
THE LAST MAN ON EARTH (1964) is constructed of three distinct acts, beginning with a series of aerial shots depicting a sprawling, if barren metropolis. As these progress, the shots become more and more grim, eventually depicting dead bodies strewn over sidewalks, streets and stairs as well as a church’s marquee which boldly proclaims that THE END HAS COME. The sequence comes to its conclusion on a sleepy street, which would surely be charming if not for all the bodies.
It is here that through a broken and boarded window, we catch the first glimpse of our hero. Starring as Dr. Robert Morgan we have the great Vincent Price (HOUSE ON HAUNTED HILL, 1959, THE ABOMINABLE DR. PHIBES, 1971). Initially asleep, Robert is jarred awake to the shrill sound of an alarm clock. And like many of us are apt to, he greets the morning with all the excitement of getting a root canal, as he shuffles off and into the business of the day.
“Another day to live through. Better get started.”
With this haunting line, so begins the film’s first act.
For quite a while, the movie trudges along as a sort of one man show–depicting a typical day in the life of the titular LAST MAN ON EARTH. Initially, all of the film’s dialog is delivered via an inner monologue–providing vital insight into the mind of our protagonist, as well as establishing the ins and outs of this post-apocalyptic world. Apparently it has been three years since Morgan inherited the Earth, though by his own account if feels quite a bit longer.
After checking his calendar and adding oil to the ole’ generator, Morgan steps outside to greet the morning sun as well as some fresh dead folk on his lawn. These he regards with all the awe one typically reserves for the first glimpse of the morning paper. It is about this time that we begin to learn about the film’s so-called monsters. Though I have thus far likened these infected humans to “zombies”, this is not entirely accurate. While the infecteds are certainly zombie-esque (given their apparent penchant for moaning, shuffling, blank stares, etc.) they also share quite a few similarities with another classic monster–the vampire.
We soon learn that Morgan has fortified his home with such oddities as strands of garlic and mirrors. According to this film’s mythology, mirrors can be used to repel the infecteds who have a serious hate-on for their own hideous reflections. Of course later when we are treated to the limits of the makeup department, this fact becomes quite silly since the monsters (zompires?) look about as monstrous as the average post-bender collegiate.
But I digress…
After a few more steps in the morning routine, Morgan packs his kit with some freshly made stakes, loads up the car with two bodies from the lawn and hits the road. Better get a move on, Morgan–you’ve got a full day of errands ahead of you and daylight, she’s a burnin’.
After a quick fill-up, the good doctor’s first stop is “the pit”. Basically a perpetually burning gorge of insinuated bodies (insinuated since we never actually see any besides the ones Morgan tosses in). Admittedly, out of the many daily functions we have seen Dr. Robert Morgan perform so far, throwing dead zompires into the mouth of hell is probably the most exciting. The sequence ends with Morgan chasing the bodies with a whole can of petrol and a jumbo novelty torch–just to let the we the audience know that they the filmmakers were also wondering what was keeping this pit thing going.

Stop number two on Morgan’s crazy Saturday adventure is a visit to the local supermarket. Surprisingly, he passes through aisles stocked with cans and boxes of viable food, ignoring the lot. The item he’s after today is garlic since his home supply has apparently lost its potency. A good thing indeed that the market’s freezer is still working and there is a large supply of the stinky vampire repelling bulb inside. After stocking up on all the garlic he can carry, Morgan moves on to the really fun part of the day… FULL THROTTLE ZOMPIRE KILLING SPREE!!!
The score blares, all brass and swagger as we are treated to a montage of Vincent Price kicking in doors, hammering down stakes and feeding “the pit” with some freshly slain zompire folk. Then wash, rinse, repeat–it’s all very exciting. Eventually though, the sun starts to get low in that western sky. Noticing this, Morgan decides he had better head home, batten down the hatches and hunker in for another long night. And so he does. One safely settled in, the zompires appear almost at once, planks of wood in hand–they assault the doctor’s home, even calling him by name!
“Morgan… Come out Morgan…”
Fortunately for the good doctor, his zompire assailants have the approximate upper body strength of Spongebob Squarepants. After three years of nightly onslaughts, they have yet to set as much as one wormy toe into his fine, upper middle class home.
At its core, the point of act 1 is to show us a typical day in the life of THE LAST MAN ON EARTH. The mundanities feel mundane for a very good reason–Morgan is running on fumes. He exists simply to exist. Filling his time with the self appointed purpose of exterminating as many zompires as possible–making sure not to die in the process so he can do it all over again the next day, and the next… and the next. 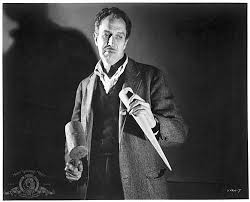 Act 2 appears pretty much out of nowhere and is basically one big flashback. In it, we are able to glimpse a portion of Morgan’s life prior to the human race’s nigh-extinction. We get to meet his lovely wife and adorable young daughter, as well as his best friend Ben (who we’ve already met as the hero zompire who endlessly calls Morgan by name). These are the early days of the disease and they aren’t pretty–what with all the panic and hazmat suits and dead kids getting hauled away in trucks. The sequence is certainly interesting enough and adds some depth to our main character.
With the flashback over, we smack headlong into act 3. The final portion of the film takes what we think we know about the world and turns it on its head. Without giving too much away, I will say that the conclusion does a good job of providing an alternate look at Morgan’s unique outlook and situation.
THE LAST MAN ON EARTH (1964) is admittedly something of a sluggish affair. It’s production is low and it features some seriously terrible audio quality as well as glaringly looped voice overs.–however, the film is certainly not without its charm. Price’s character, while incredibly disillusioned and apathetic, is fascinating when juxtaposed against the dystopian world just outside his door. We come to understand that Dr. Robert Morgan is a shell of his former self. A man resigned to continue the business of living–somehow finding balance in day to day survival, but perhaps without knowing why. And somewhere along the way, he became something unrecognizable.
I think Nietzsche probably said it best.