Our second Vampire Writer is Ninfa Hayes, author of Bites, a collection of two novellettes. In this post she faces the indepth Vampire interview. Later in the week, she will tell us all about her muse… 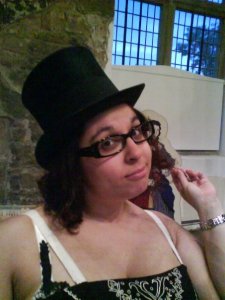 Originally from Italy, she’s half Spanish, half Italian and British by choice and marriage.

She loves books and is a total bookaholic! Reading and writing have always been a big part of her life and for this she thanks both her parents for passing down the literary gene and the passion for a good story.

Ninfa is big on Networking and co-runs an array of Facebook pages and blogs about books and all things supernatural. She also reviews books for the Facebook “Bookaholics Book Club” on a regular basis.

In this spirit, she’s also training her daughter in these dark arts and plans on making her a huge geek, whether she likes it or not!

If you’d like to find out more about Ninfa and her stories, you can check out her Facebook author page, Ninfa Hayes.

I think I was about 10 or 11. Age is blurry but the memory is very vivid. I can still see myself in my bedroom, pen in hand and a notebook, writing a story based on Greek mythology about a young man that falls in love with the Moon. He’s cursed by Aphrodite because he’s a poet and writes of the beauty of Artemis disregarding the Goddess of Love and Beauty in favour of the cold and unattainable Huntress. He dies, wasting away, dreaming of night skies and endless moonlight.

Yeah…I seemed to have a flair for the tragic even at that time, lol.

I’ve always written throughout my life, and never finished anything. Then 3 years ago I became pregnant and went on maternity leave. For the first time in like over 10 years I was at home, with nothing more to do then complain about my increasing discomfort, and then after the birth of my beautiful daughter, complain about the lack of sleep and endless days spent in front of the TV watching crap daytime programs. I needed something to do, so I started writing again. This time it seemed with more purpose and a clear focus that I had lacked in the past.

Short stories started flowing and I had increasingly encouraging comments from friends and fellow writers.

Then last year it all finally clicked together. I had a good idea for a book comprising 2 short novelettes and pitched it to a friend, fellow author and publisher.

She jumped on the wagon and gave me her trust and support, as well as her invaluable experience and insight into the writing and publishing business (I’m looking at you Miss Dianna Hardy!).

Writing is all I’ve ever wanted to do and I wanted to be able to share it with people around the world as well as my loved ones and that’s what pushed me into taking the final step in becoming a published author. Add to that a whole lot of luck and here I am today, weeks away from publishing my first book!

Now there’s a question…lol. Greatest strength I think it’s my bottomless pit of ideas. There’s not a day that goes by when I don’t think of a new concept or story that would be great to develop. I’m also my worst critic which technically is both a strength and a weakness I guess, and I will go over and over a story punching holes in the plot and challenging the vision and the characters until I’m am absolutely, 100% happy with the whole concept, rhythm and feel of the story.

Unfortunately I seem to get distracted by ideas easily, so I’m a very slow and erratic writer. I’ll go days without writing a word, mulling the story over in my head, then sit down and write 3000 words in 2 hours when the story is ready to flow. I’ve tried to overcome this but for now it’s an insurmountable weakness. If anyone has any suggestions feel free to comment, I’d much appreciate it 😉

Oh Manchester, thy name is love in my heart!

There’s a strange connection I’ve always had to my adopted home-town, Manchester. From the first time I set foot here, it was love at first sight. I moved in 1999, at the dawn of the year 2000 and I’ve never looked back.

There are many places that inspire me in this great city, and I’ve met all sorts of characters in my 13 years of Mancunian residence, providing endless forage for the creative mind.

Currently I have 2 full novel projects that are set in Manchester and that I’m hoping to publish in the next couple of years.

I don’t know what it is about this city that speaks to me, but if you, like me, believe in past lives, then let’s just say that I’ve come back home and the happiness this brings me it’s a constant source of inspiration.

Manchester has always been a centre of creativity and magic, just look at the incredible music bands, writers and artists in general that were born here. Add to that a thriving Pagan community and this is pretty much the only place to be for me 😉

Ouch, another difficult question…I believe there are far too many books that have contributed in making me the person, and the writer I am today, although there is one author in particular that opened the doors for my love of Fantasy, and that is Marion Zimmer Bradley.

Before I read “The Mists of Avalon” I had no idea what an incredible wealth of Fantasy books there was out there. “The Mists of Avalon” was my initiation into a whole new world, or should I say, into many worlds. I avidly read that and any other Marion Zimmer Bradley book I could get my hands on back in Italy, where I’m from originally, and then it was all down hill from there, lol.

Writing about Vampires was never a conscious decision for me, it kinda just happened. It all started with “Last of the Blood”, the first Novellette in my upcoming book “Bites”. It was originally supposed to be a short story but the characters just kept coming back for more.

I suppose I wanted to give my own take on this very much explored topic. There are all sorts of Vampire Books, Short stories, Novellas, Fan Fics etc. out there and many original takes on this supernatural creature. Some are dark, some light hearted and others outright scary.

I grew up reading Bram Stocker’s classic “Dracula” and Anne Rice’s Vampire Chronicles and I suppose those were my main influences in the Vampire genre.

I loved the romantic and tortured aspects of some of Anne Rice’s characters, but also the lingering horror of Stocker’s portrayal of Count Dracula.

I think with the YA market taking over in terms of Vampire stories, I just wanted to re-explore those more classic aspects of the Vamp figure and mix them up my own way.

I think it’s just such a versatile creature to write and it has touched people’s imagination all over the world for far more centuries than we realize. The first mention of “blood sucking/energy sucking” monsters goes back to Mesopotamian times. Ancient Greeks and Romans had the notion of “demons” and other creatures that fed off human and animal blood also, although the actual term “Vampire” didn’t come into play until around the 1800s.

There’s an aura of romance and danger that surround this haunted creature. It can be portrayed in so many different ways, from the tortured soul to the monstrous, heartless demon. You can write of Vampires in Romance, Horror, Crime and Action books, both for Adults and Younger readers.

Vampires are the monsters hiding in the night, out there. It is a creature that right now could be lurking outside your door. It’s believable because it’s part of our subconscious fear of the dark and of our own desires and at the same time it embodies the sensual and tantalizing aspects of that unknown and forbidden darkness.

Okay, now I have a “Celebrity Vamp Death Match” scene playing up in my head, lol.

Count Vlad would probably quickly go down, overpowered by the younger breed of Vamps poor thing.

My first response to this question was Lestat De Lioncourt, if taken out of the second and third books of the Anne Rice Vampire Chronicles, since after that he goes a little wimpy for my taste. If we are talking Vamps in a more vast meaning (including characters with Vampire blood or that are of a Vamp theme variation), then I’d say Rosemarie Hathaway would pretty much kick ass (Vampire Academy series by Richelle Mead) followed closely by Dimitri Belikov from the same series.

Oh Gods! Give me Count Dracula’s portrayal by Gary Oldman any day and I’ll show you a sexy Vamp! And yeah, that includes gorgeous dress style.

How well do you think your character would fare against the winner(s) of the above?

Well, let’s just say it is in Damon’s nature (“Last of the Blood” Novellette) to wait patiently on the side line. I don’t think he’d openly engage in a fight with the winners, he’d just follow his survival instincts and possibly hide until the others have destroyed each other, then end up being the last one standing, lol.

He is also sort of “swoon worthy” though cause he’s very pretty, lol, so maybe he could come in the top 10 of the Sexy Vamps list. I’ll let the readers decide on that one…

Vamp characters from my second Novellette, “Demonica”, would probably be more “fighty” types, especially Malcolm, though he’s a bit of a villain so I’m not sure I’d actually want him to win Xp (Yes, I have preferences between my own characters…I’m a bad creator…). 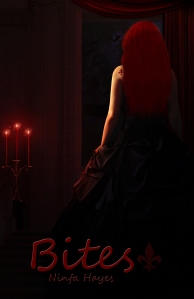 “Bites” is a Dark Fantasy anthology containing two Novelettes (counting around 15k words each) that share the common theme of Vampires.

“Last of the Blood” is Damon’s story as he struggles to come to terms with his Vampire nature and faces heartbreak and difficult choices in his desperate quest to belong.

“Demonica” is my own fantastic take on the origin of Demons (including Vampires) and it takes inspiration from different mythologies. It’s sort of a Dark Fantasy creation tale and includes Angels, Demons and the birth of other Supernatural creatures, all seen through the eyes of Irina, a girl with a strange allure and a mysterious destiny.

There’s a little bit of everything in these two stories: love, loss, a little romance, elements of the macabre and hopefully some memorable characters and an enjoyable plot…or at least that is the hope 🙂