The theme of Vampires is inevitably going to include some elements of the past so it is fitting that this third Vampire month includes links back to some of the previous ones. Not only has Isabella Favilli, today’s guest post contributor, already had some of her work featured on this blog but her most recent collaboration has been with Ninfa Hayes, one of our Vampire Month Alumni.

Isabella has been working on the artwork for a graphic novel adaptation of Last of the Blood, one of the two novellas Ninfa published under the title of ‘Bites‘. 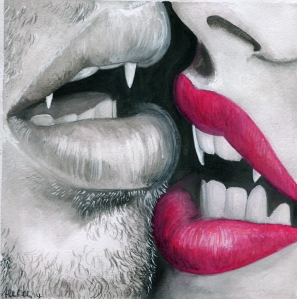 Last of the Blood follows the story of Damon, a soldier who becomes a Vampire and his long journey through history to the modern day. The following are some character shots Isabella has done in preparation for the graphic novel.

Damon, hero of Last of the Blood

If you have read Last of the Blood then these characters will be familiar to you already. If you have not then I shall not spoil anything by revealing any plot secrets about the story or the characters. Suffice to say that the novella is worth a read and I am sure the graphic novel adaptation will also be of value.

Look out later in the week for more from Isabella…