1) What is the first thing you remember drawing or painting?
A horse, I was four and everyone was kinda impressed, my mom still has it. 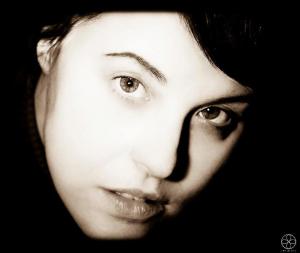 2) When did you first think you might be able to make a living as an artist?
When I was choosing my high school at fourteen, the idea was to become a graphic designer but after graduating after 5 years I realized that it was not the kind of art I loved the most; Fine Art was more what I loved and althought I was not quite sure I could make a living out of it, I still loved to paint and draw, but it stayed as a hobby for a long time, there was not much work to be found back in Italy.

3) What would you consider to be your greatest strength as an artist? What about your greatest weakness? How do you overcome this weakness?
My greatest strength is something I have been told more than realized myself.
People often tell me that the people (fantasy or real) that I make a portrait of have eyes with a soul, they can communicate real emotions, which I think it is a good thing.
My weakness? I sometimes think I might not be anything special to stand out.
As for how I overcome my weakness, I try to listen to my heart and how it feels when I look at my art work, and I also listen to what other people feel about my work, see if they receive the message I was trying to put into it; sometimes we are our worse critic, but what’s more important to me is that my work makes someone feel something, even if it isn’t what I was trying to say, any interpretation is as valid.

Figurative Art is a bit like music, it can take people to their personal place and it does not matter if it is not the same as the one that inspired the artist, once it is out, it’s for everyone to see in it what they like. It’s not good to be stuck to your own interpretation. 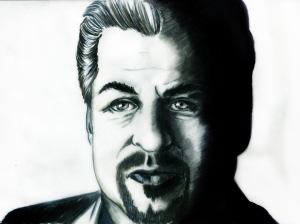 4) Tell us about the places where you have lived. Have you ever derived any inspiration from your home or from anywhere you have visited?
I was born in Rome, Italy and lived there till i was twenty six, when I moved in Manchester, and after I had my daughter in 2009, I moved in Yorkshire.
I have visited many regions in Italy, Tuscany is one of my favourite and I spent a very long time in it, I found Prague very inspiring and Paris. I particularly enjoyed seeing The Impressionists in Jeux De Paume in Paris, because together with Caravaggio they are my favourite painters.
Being born in Rome has surely given me an input when it comes to the variety of Art I got to see live, but my favourite subjects are people more than places; I have however painted a scene which was inspired by ancient roman ruins, it is still one of my favourite paintings and my best friend has proudly hanged it in her living room, when I look at it I can almost smell the air of my home town.

5) What would you consider to be your greatest influence and inspiration?
I find my heart’s darkest places to be the greatest influence, pouring that darkness out has often helped me overcome the toughest times of my life.

6) What appeals to you about Vampires?
The are beautiful, immortal and merciless but some humanity still lingers in them. I like that battle behind their eyes: between their hunger and their feelings.

And just imagine, being immortal and powerful, with great power of seduction, I think there is a lot to be attracted to.

8) In a fight between all the greatest Vampires of fiction, who do you think would come out on top?
Lestat: no one has killed him yet. He has been burnt, switched body, taken to Hell, taken to Heaven, loved, killed… he is around, as glorious as he has ever been.

9) What about in some other contest such as sexiness or dress sense? Who would win that one?
Dracula, from the movie Dracula 2000 by Wes Craven. I
have never seen a sexier vampire than the Dracula that walks in the Virgin
Store  in Dracula 2000. Gerard Butler totally got the sexiness of his character, even the Scottish accent suits him! Ok, I do have bias in this case tho…

Gary Oldman also did an amazing job as Dracula, the moment in the movie that he introduces himself to Mina is a total swoon, it is also my favourite Dracula movie, I have seen it more times that I can count and know it by heart.

10) How well do you think one of your characters would fare against the winner(s) of the above?
I am afraid my characters would not stand a chance between the most powerful and the most ancient vampire, but then again they would probably be willing victims. I think my characters secretly dream to be Lestat or Dracula’s eternal companion.

11) Tell us about your latest work.
It’s a vampire kiss, only the mouths are visible, are they gonna bite? Are they gonna kiss? There is a suspension there, open to everyone’s fantasy.

I also drew the characters from a novel called The Last Of The Blood, they don’t look particularly vampirish, but they are none the less vampires. I liked the story, written by Ninfa Hayes, and felt inspired.