For her final contribution to Vampire Month, Anila Hoxha talks to us about her very personal experiences of cancer.

I am sitting in front of my laptop, thinking about my life. Where am I now? Who have I become? I have finally made my dream come true, I have published my first book. I feel like I am dreaming, and sooner or later somebody will wake me up, but no, this is the reality.
I remember when I was too afraid to publish my books, worried of what people might think of my horror stories. At first I was embarrassed that I always made up fantasy books, and not others. Like, that was the only thing I was capable of. But what made me change my mind, and finally have the courage to publish my book?

I was diagnosed with cancer when I was fifteen. You won’t imagine what I felt in the moment the doctor gave me the news. I wanted to be left alone, in my fantasy, in the place where there was no disease. Yes, there were vampires, but they could be defeated. It could have been cool to be a vampire, no? They don’t have to suffer from diseases. I didn’t cry at all, there was no point to. Cancer didn’t knew with who he was messing with. Did he knew that I had invented so many horror stories, and I wasn’t scared from a stupid disease like him? Did he knew that he just couldn’t crush my dreams, because every time he did that, I dreamed other things, I had other plans and ambitions for the future? Well , I guess he didn’t. But it’s okay, because he does now.

Actually I never thought about my disease as something that would kill me, it was rather something annoying that would let me without school for one year. But the truth was that I risked my life, a lot. I understood now, that the fact I am alive is actually a miracle. When you have a disease, the psychology is very important. You should not worry for anything, which is a bit difficult for cancer patients since we’re torn between life and death.

To fill the empty boring days in the hospital, I decided to write a story to keep me entertained. I never thought to write a book, just something I would enjoy. I wanted to write horror. One day I was creating a film ( I like creating films in my mind), and so I decided to start writing this film in a form of story. I start writing it in English, so this way I would practice it, since English is not my Native language. Later when I started chemotherapy, I started getting worse and worse due to the chemo effects like nausea, headache, and sometimes it was difficult to breathe. But as I had to stay all day in the bed, I couldn’t write. But this book remained in my mind for a long time, until I decided “I will publish the book!” 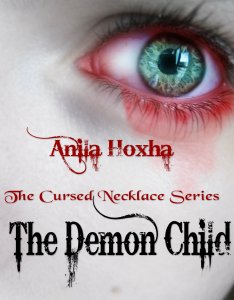 I didn’t care what people would said, I had been near death and now I was reborn. God gave me a second life, and this time I will make my dreams come true. People would say whatever they wanted.

So, I finished the book, and then I finally published.

Seeing my story in Amazon makes me feel proud of myself. I finally showed people what I am capable of.
So, don’t hesitate to make your dreams come true! Yes, you may make mistakes, that’s normal. But after hard work, you will be rewarded. It’s never too late to change your life, to give yourself what you deserved. You can wait for the fate to knock on your door, or you can go and knock to his door.

It’s all up to you. It’s us who choose our own destiny.

God bless you all.

And thank you to lurkingmusings.wordpress.com for this amazing opportunity.

Today’s Vampire Month Victim is Anila Hoxha who hails from Albania, the home of the Dhampir and the lugat (don’t know what they are, find out below). Today she tells us all about herself and on Friday she is going to tell us a very personal tale of how she came to be a writer…

You would probably find her disguised in a dark corner of her library, reading a book, trying not to make any noise, afraid that she might disturb Dracula, who is hiding at the third floor of her house in Albania. Now, don’t even ask about how he came from his castle in Romania, to Anila’s house.

Anila is a horror writer, a bookworm and Dracula’s number 1 fan. When she was little, she wanted to be a vampire hunter, but now that she found out the world was so boring and without vampires, she decided to be a vampire writer. Her book “The  Demon Child” it’s something between gothic horror, dark fantasy, urban legends, paranormal romance and mythology. Find her on twitter.

The earliest memory I have of writing was when a seven years old me decided to write a book with short novels. The first novel I started writing was about a depressed girl who hallucinates about some creatures of horror movies  and at the end she is eaten by them. Unfortunately I couldn’t publish the book, because my parents thought it was too scary. Well, I was only seven, of course they were terrified from my fantasy.

I decided to be a professional writer one year ago, after I was diagnosed with cancer. I have always been afraid of what people would think of my books. I am only a sixteen years old girl with a strange passion about horror literature and a wild fantasy. People used to laugh when I told them that I wanted to be a horror writer. But when I was diagnosed with cancer, I decided to make my dreams come true without worrying what people say. At the end it’s my life, and not theirs. If I do mistakes, those are my mistakes, and I will pay for them. God give me a second opportunity, a second life to live. I wanted to show people what I was capable of.

My greatest strength as a writer is my creativity. I can make up a whole story in a matter of hours. But my greatest weakness is finishing the book. It’s very hard to overcome this weakness, and I have to use all my will power, but I do my best. That doesn’t mean I have overcome this weakness. If somebody discovers how, please contact me.

I am born in Albania, Balkan, and my homeland has always been an inspiration to me. In our folklore, it’s very in common to find tales about dead people who rise, or dead people who talk to animals. We also have the fairies, the giants, the vampires.  Also the famous word “Dhampir”, who is a half vampire- half human, is an Albanian word. So as you can see, I am grown up with these legends. I live in a huge house with three floors. The third floor looks very ancient and scary. That’s my favourite place.

I read a lot, and I have a lot of favourite books. But the book I adore the most is “Dracula”. This book scares me and in the same time amazes me.  Every time I read this book, I feel inspired.  I don’t know why, though.

As I said before, vampires (or in Albanian “lugat”) are part of Albanian folklore. I remembered my parents used to scare me with this word, so this way I would behave well. But I start to like them when I saw the horror movie “Blade”.  Later I became addicted to vampires after I read “Dracula”. These mysterious creatures have always been my favourites, so I couldn’t do otherwise but write about them.

6)      What do you think is the attraction for Vampire fiction? Why is it such a popular topic?

Whether we are talking about “Dracula”, or “Twilight”, or “Interview with a Vampire”,  there are the same creatures, beautiful, mysterious, cursed, immortal. These words are stuck in our head. Well, everyone want to be beautiful and young forever, but immortality has a price. It’s tempting, you know. That’s why we like these creatures. They are tempting.

7)      In a fight between all the greatest Vampires of fiction, who do you think would come out on top?

I love all kind of vampires, but I think that Dracula owns the top. He’s elegant, mysterious, dangerous. He doesn’t have feelings. I mean, he doesn’t have to do anything, just to say “I am Dracula”, and we faint from fear.

8)      What about in some other contest such as sexiness or dress sense? Who would win that one?

Why would sexiness or dress sense mattered  to vampires when they can use their supernatural power and speed to track their next victim. But Dracula had some dress sense anyway.

9)      How well do you think one of your characters would fare against the winner(s) of the above?

Well, my character Billy Smith, who is the successor of a vampire hunter priest, does have an amazing dress sense . There might just be tiny problem. We can’t compare him with Dracula, because they come from different ages.

The Demon Child (The Cursed Necklace #1)

After her mysterious disappearance, everyone thought that the six years old Anne Marie Bordeleau was a victim of the “animal” attacks that was terrorizing New Orleans lately. Only her big sister thought otherwise, because of the terrible visions she had at night where Anne called her for help. But looking for Anne isn’t easy. There are secrets revealed, ancient prophecies, and legends. It’s a dark world, where even angels can fall.

How can she save her sister from the evil, if her sister is the evil itself?